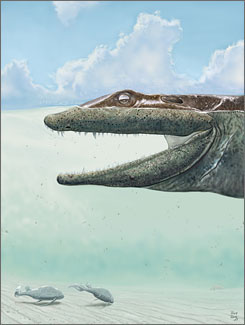 Scientists unearthed a skull of the most primitive four-legged creature in Earth’s history, which should help them better understand the evolution of fish to advanced animals that walk on land.

The 365 million-year-old fossil skull, shoulders and part of the pelvis of the water-dweller, Ventastega curonica, were found in Latvia, researchers report in a study published in Thursday’s issue of the journal Nature. Even though Ventastega is likely an evolutionary dead-end, the finding sheds new details on the evolutionary transition from fish to tetrapods. Tetrapods are animals with four limbs and include such descendants as amphibians, birds and mammals.

While an earlier discovery found a slightly older animal that was more fish than tetrapod, Ventastega is more tetrapod than fish. The fierce-looking creature probably swam through shallow brackish waters, measured about three or four feet long and ate other fish. It likely had stubby limbs with an unknown number of digits, scientists said.

“If you saw it from a distance, it would look like a small alligator, but if you look closer you would find a fin in the back,” said lead author Per Ahlberg, a professor of evolutionary biology at Uppsala University in Sweden. “I imagine this is an animal that could haul itself over sand banks without any difficulty. Maybe it’s poking around in semi-tidal creeks picking up fish that got stranded.”

This all happened more than 100 million years before the first dinosaurs roamed Earth.

Scientists don’t think four-legged creatures are directly evolved from Ventastega. It’s more likely that in the family tree of tetrapods, Ventastega is an offshoot branch that eventually died off, not leading to the animals we now know, Ahlberg said.

“At the time there were a lot of creatures around of varying degrees of advancement,” Ahlberg said. They all seem to have similar characteristics, so Ventastega’s find is helpful for evolutionary biologists.

Ventastega is the most primitive of these transition animals, but there are older ones that are oddly more advanced, said Neil Shubin, professor of biology and anatomy at the University of Chicago, who was not part of the discovery team but helped find Tiktaalik, the fish that was one step earlier in evolution.

“It’s sort of out of sequence in timing,” Shubin said of Ventastega.

Ahlberg didn’t find the legs or toes of Ventastega, but was able to deduce that it was four-limbed because key parts of its pelvis and its shoulders were found. From the shape of those structures, scientists were able to conclude that limbs, not fins were attached to Ventastega.

One question that scientists are trying to figure out is why fish started to develop what would later become legs.

Edward Daeschler, associate curator of vertebrate zoology at the Academy of Natural Sciences in Philadelphia, theorizes that the water was so shallow that critters like Ventastega had an evolutionary advantage by walking instead of swimming.

Originally provided by the Associated Press