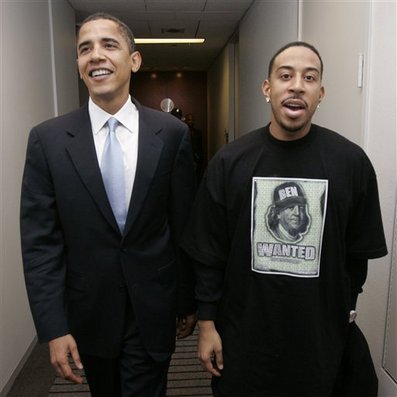 The lyrics don’t spare the Rev. Jesse Jackson, who recently apologized for making crude comments about Obama. “If you said it then you meant it,” intones the rapper.

Obama’s campaign blasted “Politics as Usual,” which is on the “Gangsta Grillz: The Preview” mixtape with Atlanta spinner DJ Drama.

“As Barack Obama has said many, many times in the past, rap lyrics today too often perpetuate misogyny, materialism, and degrading images that he doesn’t want his daughters or any children exposed to,” campaign spokesman Bill Burton said in an e-mail statement Wednesday. “This song is not only outrageously offensive to Sen. Clinton, Rev. Jackson, Sen. McCain and President Bush, it is offensive to all of us who are trying to raise our children with the values we hold dear. While Ludacris is a talented individual he should be ashamed of these lyrics.”

Ludacris’ publicist and manager did not immediately return calls Wednesday for comment.