The Pentagon has extended the tour of 2,200 Marines in the 24th Marine Expeditionary Unit in Afghanistan, after insisting for months the unit would come home on time. The Unit is doing combat operations in the volatile south and will stay an extra 30 days and come home in early November rather than October, according to Marine Col. David Lapan.

Military leaders as recently as Wednesday stressed the need for additional troops in Afghanistan, while Defense Secretary Robert Gates, however, has repeatedly said he did not intend to extend or replace the U.S. Marines in Afghanistan, calling their deployment there an extraordinary, one-time effort to help tamp down the increasing violence in the south. Asked about the possibility of an extension in early May, Gates said he would “be loath to do that.” He added that “no one has suggested even the possibility of extending that rotation”; nonetheless, Lapan said Thursday that commanders in Afghanistan asked that the Marines stay longer.

The Pentagon announced in January that the MEU was being ordered to Afghanistan, mostly as a result of failed efforts to press other NATO nations to increase their troop levels at the time had failed. Commanders faced with increasing violence have said they need at least 7,500 more troops in Afghanistan. President Bush and defense officials have said they hope to identify additional units by the end of the year that could go to Afghanistan early next year. 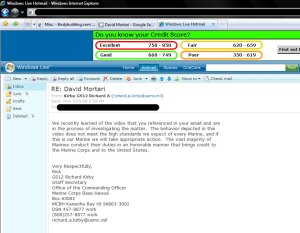 Lance Cpl. David Motari of 1st Battalion, 3rd Marine Regiment is a small part of the worst this country has to offer. Our brave men and women fighting in a war ushered in by lies and miss-truths have and continue to sacrifice their lives for this country. Can we trade one of these brave dead soldiers in for David Motari?

A Youtube video surfaced in March showing Lance Cpl. David Motari laughing as he throws a puppy off a cliff to its death. The video was shot by San Diego-based Sgt. Crismarvin Banez Encarnacion who laughs and says “that’s mean Motari”.

David Motari is being removed from the Marines and Crismarvin Banez Encarnacion is receiving some kind of disciplinary action. I think his punishment should be to toss David Motari off the same cliff… wait that’s not punishment!

Email Pic from The Progressive Truth

Under pressure to meet combat needs, the Army and Marine Corps brought in significantly more recruits with felony convictions last year than in 2006, including some with manslaughter and sex crime convictions.

Data released by a congressional committee shows the number of soldiers admitted to the Army with felony records jumped from 249 in 2006 to 511 in 2007. And the number of Marines with felonies rose from 208 to 350.

Those numbers represent a fraction of the more than 180,000 recruits brought in by the active duty Army, Navy, Air Force and Marines during fiscal year ending Sept. 30, 2007. But they highlight a trend that has raised concerns both within the military and on Capitol Hill.