The Decline of American Idol 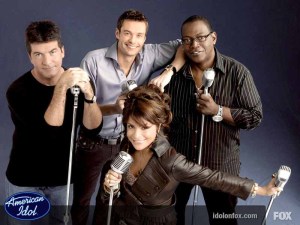 y’all getting sick of American Idol yet?

Even though about 29.2 million people have been tuning in every week this season, industry insiders are twittering about the show’s notable declines in key demographics and average total viewers.

Simon Cowell was quoted as saying that Idol was suffering this year because the contestants lack “personality” and are making “safe” song choices.

But, the industry insiders assert that it could be a fundamental problem — show fatigue.

The conventional wisdom among TV producers and their accountants is that hit shows, no matter how popular, usually start delivering diminished ratings somewhere from Season 5 to Season 7.

Idol is currently in its 7th season.

The report goes on to say that some fans are seeing the program as less essential than it was a year or two ago.

How many times can Americans see Ryan Seacrest insult Simon Cowell, and vice versa, before they say, “Enough already”?

Are you guys over Idol? Is it time to pull the plug? Can anything be done to spice it up in a good way?

This story was reposted from Perez Hilton.com