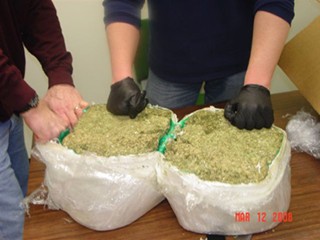 A mistaken delivery of a Fedex package tipped off police to a 200-pound shipment of marijuana that someone tried to send from Pembroke Pines, Florida to Baltimore. According to police, they learned about the shipment when it was delivered Tuesday to the wrong resident.

Authorities posing as FedEx employees arrested the shipment’s intended recipient, 30-year-old Richard Gwatidzo. He was charged Thursday with possession of a large quantity of a controlled dangerous substance with intent to distribute along with other drug related charges.

Also seized were eight other FedEx boxes with nearly 400 pounds of the drug.

In the end of this anti-drug operation, the authorities are trying to determine the sender’s identity.

With all the states passing laws allowing medical marijuana, it leaves us to wonder if authorities will burn it, smoke it, or let sick people have it.