Give Peace A Chance: Handwritten Lyrics Sell At Auction 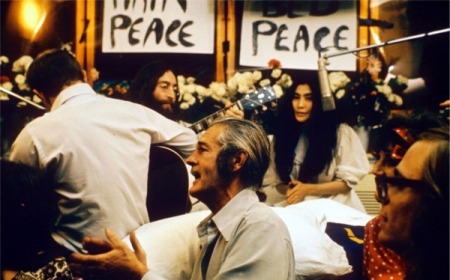 Christie’s auction house has collected $833,654 John Lennon’s handwritten lyrics to “Give Peace a Chance”, which were written during Lennon’s 1969 Bed-in protest for peace at the Queens Elizabeth Hotel in Montreal.

According to Christie’s spokeswoman, Zoe Schoon, Lennon gave the sheet to 16-year-old Gail Renard during the eight-day Bed-in. Lennon wrote the lyrics and recorded the song in the hotel room with about 50 guests, who included singer Petula Clark and beat poet Allen Ginsberg. They are some of the voices in the background one can hear during the chorus.