I think this is a good sign that the fight left in this country is not gone.  Founded on the principles of freedom and individual rights, peaceful ptotest should never be ceased.  In St. Paul, the police pulled the plug on a Rage Against The Machine concert meant to act as a protest to the Republican National Convention.  As you will see in this video, the crowd supports the band as they opt to do an accapella version of a song as a continuation of their right to peaceful protest.  This is America?  Should the state or its police be using tax payers’ dollars to shut down peaceful protest?  NO

Listen to iNPLACENEWS’ exclusive interview with Rage Against The Machine guitarist and founder, Tom Morello, HERE

Marine Ordered to Stand Trial For Killings in Fallujah 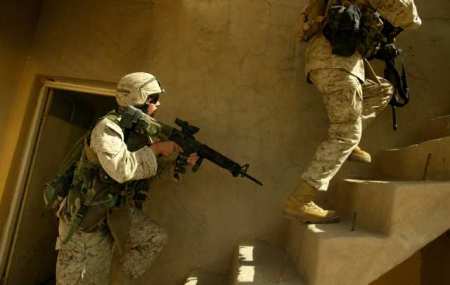 A Camp Pendleton Marine sergeant was ordered Friday to stand trial on charges of unpremeditated murder and dereliction of duty in the killing of an unarmed detainee in Fallujah, Iraq.

Lt. Gen. Samuel Helland ordered the court-martial of Sgt. Ryan Weemer after finding there was sufficient evidence to send him to trial.

Weemer is one of three current and former Marines accused of breaking rules of engagement and killing four men they had captured after a platoon commander radioed to ask whether the Iraqis were “dead yet.”

A telephone message left by for Weemer’s attorney, Paul Hackett, was not immediately returned.

The killings happened in November 2004 during the invasion of Fallujah, one of the fiercest ground battles of the Iraq war.

The case came to light in 2006, when Weemer volunteered details to a U.S. Secret Service job interviewer during a polygraph screening that included a question about the most serious crime he had ever committed.

Weemer, of Hindsboro, Ill., is charged with one count of murder and six counts of dereliction of duty encompassing failure to follow the rules of engagement in Fallujah and failing to follow standard operating procedures for apprehending or treating detainees or civilian prisoners of war.

Helland’s decision to order the court-martial follows an Article 32 hearing, similar to an evidentiary hearing, where prosecutors argued that Weemer, a burly 25-year-old honored with a Purple Heart, should be tried for unpremeditated murder because he knew the rules of engagement forbade harming anyone in his custody.

During the hearing last month, prosecutors played a tape recording of the Secret Service interview where Weemer recounted arguing with his squadmates about what to do with the detainees – all military-age males captured in a house where weapons were also found. The squad was under pressure from the platoon to get moving.

Marine Corps spokesman Lt. Col. David Griesmer said Weemer next faces arraignment on the charges at Camp Pendleton. A date has not been set.

Weemer’s attorney has put much of the blame on Weemer’s former squad leader, saying Jose Nazario Jr. escalated the situation inside the house by beating one detainee with the butt of a rifle after the weapons cache was found.

Nazario, 27, of Riverside, Calif., has been charged with two counts of voluntary manslaughter in the killing of two captives. The former sergeant is scheduled to be tried Aug. 19 in federal court because he has already completed his military service.

Another Marine, Sgt. Jermaine Nelson, 26, of New York, is slated to be court-martialed in December on charges of unpremeditated murder and dereliction of duty for his role in the alleged killings.

Standoff in Iraq Is NOT Just About Oil or Unwanted US Presence, 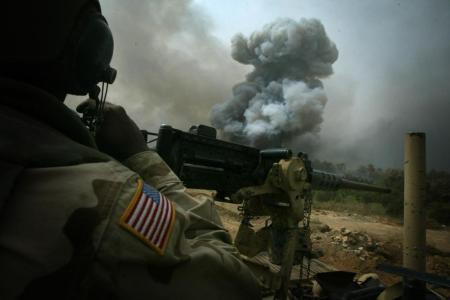 The decisive battle of the Iraq war is shaping up – not in the streets of Baghdad but in the halls of government where the future of America’s role across the region is on the line.

American and Iraqi officials have expressed new resolve to hammer out far-reaching deals that would allow U.S. forces to remain on bases across Iraq once the U.N. mandate expires at year’s end.

The stakes in the talks are enormous.

The outcome will shape not just Iraq for years to come – but, more important, America’s strategic position all across the oil-rich Persian Gulf at a time when Iran’s influence is growing. The U.S. maintains substantial air and naval forces elsewhere in the Gulf but few ground troops except in Iraq.

A pact also would assure Arab allies that Iraq would not fall under domination by Iran, which is pressuring the Iraqis to refuse any deal that keeps U.S. soldiers here.

But critics in the United States fear it will tie the hands of the next president when millions of Americans are anxious to bring troops home. Many Iraqis, in turn, worry the deal will allow American domination of their country for decades.

With so much in the balance, the Iraqi government said Wednesday that both Washington and Baghdad recognize the need to finish the talks by July’s end “to avoid any legal vacuum that may arise.”

That came only days after it seemed the deal was dead. But Foreign Minister Hoshyar Zebari said the prospects for an accord had brightened because of new U.S. flexibility after meetings in Washington.

Nevertheless, the two sides remain far apart on core issues, including the number of bases where the United States will have a presence, and U.S. demands for immunity from Iraqi law for American soldiers and contractors.

Other obstacles include U.S. authority to detain suspects, fight battles without Iraqi permission and control of the country’s airspace.

Iraq’s parliament must sign off on the deal by year’s end – and approval is by no means certain.

Opposition to the initial U.S. demands brought together rival Sunni, Shiite and Kurdish leaders who all complain the deal would leave real power in American hands.

The oil minister, who is close to the country’s powerful Shiite clerical leadership, told the British newspaper The Guardian this week that Iraq will demand the right to veto any U.S. military operation.

But American commanders believe they need such sweeping powers to protect U.S. soldiers in a combat zone.

Publicly, U.S. officials have expressed confidence they can find language that will satisfy the Iraqis on all major issues. But the negotiations are taking place against the backdrop of war and intense power struggles among rival ethnic groups in Iraq – each with its own agenda.

The U.S. operates scores of bases throughout the country, including the sprawling Camp Victory headquarters in Baghdad, Asad air base in western Iraq and the giant air facility at Balad, a 16-square-mile installation about 60 miles north of the capital that houses tens of thousands of American troops, contractors and U.S. government civilians.

It’s still unclear how many of the facilities Washington would want to keep.

If all else fails, the two sides could go back to the U.N. Security Council and seek an extension of the mandate allowing troops in Iraq.

But that could prove politically embarrassing – and difficult – in the waning days of the Bush administration or the early days of the new U.S. presidency.

The current standoff has its roots in events last August when leaders of Iraq’s rival factions – facing enormous U.S. pressure to resolve their differences – signed a declaration of unity.

It included a statement that Iraq’s government wanted a long-term security relationship with the United States apart from U.N. mandates, which Iraq has long wanted to end.

A few months later, Bush and al-Maliki signed a statement of principles to negotiate two agreements – a broad security framework and a second deal spelling out the rules for the U.S. military presence.

Talks began in March but Iraqi officials were outraged over the initial U.S. demands – especially immunity for U.S. soldiers and security contractors.

The American draft also included no firm commitment to defend Iraq from foreign invasion – which would require U.S. Senate approval – nor a timetable for the departure of American troops, according to Iraqi officials. U.S. officials have released few details.

After Iraqi negotiators briefed lawmakers last month, politicians from all walks paraded in front of microphones to denounce the U.S. proposals.

Some commentators likened the U.S. position to the Iraqi-British treaty of 1930, which gave Britain virtual control of the country and is widely seen here as a humiliation.

Shiite lawmaker Haidar al-Abadi, speaking for al-Maliki’s party, said June 4 that “negotiations are at a standstill, and the Iraqi side is studying its options.” A week later al-Maliki himself said talks had reached a “dead-end.”

Aides scrambled to clarify that al-Maliki did not mean negotiations were over. But his comments reflected Iraq’s resolve not to accept an agreement short of major Iraqi demands.

“We could not give amnesty to a soldier carrying arms on our soil,” al-Maliki said then.

Some Sunni groups, for example, privately favor a continued American presence as a counterweight to Iran’s influence among Shiites. Yet several leading Sunni politicians signed a letter to Congress insisting on a timetable for a U.S. withdrawal – in part to needle al-Maliki on an nationalistic issue.

Shiite parties, in turn, believe the agreement would shore up American support for al-Maliki ahead of parliamentary elections next year – a goal they seek. But Shiite leaders are also anxious to take over full control of their country.

Meanwhile, recent Iraqi military successes against al-Qaida in Mosul and Shiite extremists in the south have convinced some Shiite politicians they don’t really need America.

“Iraq has another option that it may use,” al-Maliki said recently. “The Iraqi government, if it wants, has the right to demand that the U.N. terminate the presence of international forces on Iraqi sovereign soil.”

This story is originally posted at AssociatedPress.com

The House Judiciary Committee threatened to subpoena former White House adviser Karl Rove if he does not agree by May 12 to testify about former Alabama Gov. Don Siegelman’s corruption case. Karl Rove is speaking to the media about the matter almost as if to spite the Congressional inquiry, the House Judiciary Committee says. In a letter to Rove’s attorney, the committee’s Democrats said it was “completely unacceptable” that he has rejected the panel’s request while discussing the matter in the media.

“We can see no justification for his refusal to speak on the record to the committee,” the letter states. “We urge you and your client to reconsider … or we will have no choice but to consider the use of compulsory process.”

The invesitgation of the committee stems from the question of whether or not Republican appointees at the Justice Department influenced Siegelman’s prosecution to greatly decrease the chances of his re-election. It is part of a broader inquiry into whether or not U.S. attorneys were terminated from their positions for not aggressively going after Democrats. 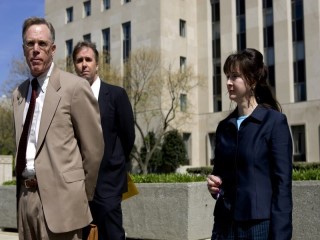 Deborah Jeane Palfrey, also known as the DC Madam, was recently convicted of a few different crimes including money laundering and using the mail for illegal purposes surrounding her run as the leader of a major Washington, DC prostitution ring that served high-end clients. Her body was found in her mother’s Florida home after she apparently commited suicide, thus evading sentencing. With her death goes more chances of getting more names of clients that allegedly included Congressmen.