Another Taser Death at the Hands of Canadian Police 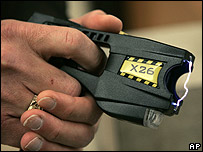 Ontario’s Special Investigations Unit is looking into the death of a man who collapsed after a confrontation in which police officers used a Taser on him after they responded to a call about a man causing a disturbance in southwestern Ontario’s Norfolk County.

According to a statement from John Yoannou, the spokesman for the Special Investigations Unit, the officers were confronted by Jeffrey Mark Marreel, who seem combative.

In order to subdue Marreel and take him into custody, a taser was used. He was then transported to the Simcoe, Ontario provincial Police Station. Upon his arrival at the station, Marreel collapsed and was pronounced dead sometime later at Norfolk General Hospital. Marreel was 36 years old.

Yoannou said an autopsy will be conducted Tuesday.

The incident occurred only days after the Royal Canadian Mounted Police announced it would restrict Taser use significantly.