Lawsuit: Give Me My Fake Leg Back 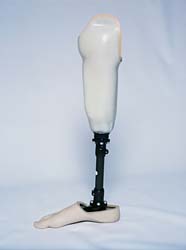 After being shot five times, a western Nebraska man had to go to court to get his prosthetic leg back from prosecutors.

McCabe’s prosthetic left leg had been held since Friday’s shooting because prosecutors wanted to run tests on it and a bullet lodged inside.

The 58-year-old McCabe, who lost his leg below the knee in a railroad accident roughly 30 years ago, filed his lawsuit Tuesday.

McCabe lawyer argued it wasn’t practical for him to replace the specially built, $28,000 prosthesis.

Police removed the bullet from the leg before returning it. No arrests had been made by Wednesday.