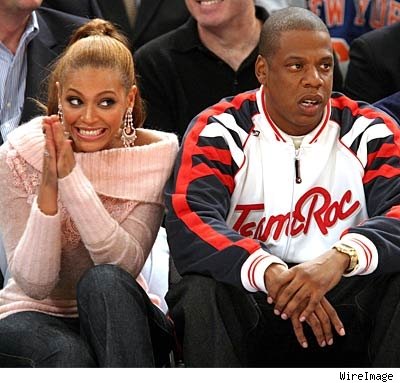 Trouble in paradise already? Or was it pregnancy hormones?

An eyewitness reports that Beyonce gave Jay-Z a bit of ‘tude at a Barack Obama rally in Hollywood earlier this week.

Here’s how it supposedly went down — Jay was performing as part of the rally at the Hollywood Bowl. After a dig at George W Bush, the rap megastar tried to lift the mood by rapping over a few songs.

Flicking through his box of oldies, the DJ slapped on one of Beyonce’s biggest hits, Crazy In Love. But as the fans grooved, Jay-Z growled. Storming to the mic, he yelled: “Fuck that. Sorry Bey but fuck that – let’s play something else.”

The insider claims this infuriated Beyonce! She stormed off….but not before laying into Hova away from prying eyes.

“Beyonce had been side stage for most of the night, dancing and singing along. But when Jay-Z got the song pulled, her mood soured. He meant it as a joke, but Beyonce didn’t take it that way. After he came off stage, she confronted him, demanding to know what the hell his comments had been about. She was gesturing wildly and not looking happy.”

Tough guy Jay apparently, like any good husband should (wink, wink) ‘grovelled’ to make it all better. Peace was apparently restored.

The eyewitness goes on to say, “It’s a shame because earlier the pair had been flashing their tattooed wedding ring fingers. Both have ‘IV’ – the date of their wedding’ – inked on.”

This story brought to you by Perez Hilton.com

** Between marrying a gorgeous, well-spoken, talented and successful woman like Beyonce’, Jay-Z should be happy. Does he look happy in this photo?