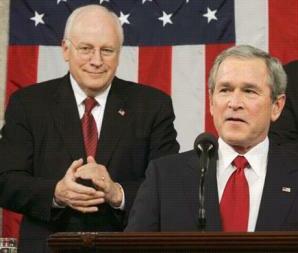 President Bush has asserted executive privilege to prevent Attorney General Michael Mukasey from having to comply with a House panel subpoena for material on the leak of CIA operative Valerie Plame’s identity.

A House committee chairman, meanwhile, held off on a contempt citation of Mukasey – who had requested the privilege claim – but only as a courtesy to lawmakers not present.

Rep. Henry Waxman, chairman of the House Oversight Committee, rejected Mukasey’s suggestion that Vice President Dick Cheney’s FBI interview on the CIA leak should be protected by the privilege claim – and therefore not turned over to the panel.

“We’ll act in the reasonable and appropriate period of time,” Waxman, D-Calif., said. But he made clear that he thinks Mukasey has earned a contempt citation and that he’d schedule a vote on the matter soon.

“This unfounded assertion of executive privilege does not protect a principle; it protects a person,” Waxman said. “If the vice president did nothing wrong, what is there to hide?”

The assertion of the privilege is not about hiding anything but rather protecting the separation of powers as well as the integrity of future Justice Department investigations of the White House, Mukasey wrote to Bush in a letter dated Tuesday. Several of the subpoenaed reports, he wrote, summarize conversations between Bush and advisers – are direct presidential communications protected by the privilege.

“I am greatly concerned about the chilling effect that compliance with the committee’s subpoena would have on future White House deliberations and White House cooperation with future Justice Department investigations,” Mukasey wrote to Bush. “I believe it is legally permissible for you to assert executive privilege with respect to the subpoenaed documents, and I respectfully request that you do so.”

Waxman said he would wait to hold a vote on Mukasey’s contempt citation until all members of the panel had a chance to read up on the matter.

The Bush administration had plenty of warning. Waxman warned last week that he would cite Mukasey with contempt unless the attorney general complied with the subpoena. The House Judiciary Committee also has subpoenaed some of the same documents from Mukasey, as well as information on the leak from other current and former administration officials.

Congressional Democrats want to shed light on the precise roles, if any, that Bush, Cheney and their aides may have played in the leak.

Cheney’s then-chief of staff, I. Lewis “Scooter” Libby, also was involved in the leak and was convicted of perjury, obstruction and lying to the FBI. Last July, Bush commuted Libby’s 2 1/2-year sentence, sparing him from serving any prison time.

Libby told the FBI in 2003 that it was possible that Cheney ordered him to reveal Plame’s identity to reporters.