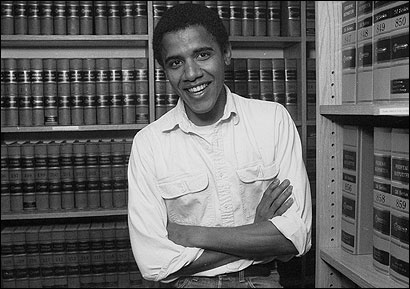 The new president of the Review is Barack Obama, a 28-year-old graduate of Columbia University who spent four years heading a community development program for poor blacks on Chicago’s South Side before enrolling in law school. His late father, Barack Obama, was a finance minister in Kenya and his mother, Ann Dunham, is an American anthropologist now doing fieldwork in Indonesia. Mr. Obama was born in Hawaii.

”The fact that I’ve been elected shows a lot of progress,” Mr. Obama said today in an interview. ”It’s encouraging.

”But it’s important that stories like mine aren’t used to say that everything is O.K. for blacks. You have to remember that for every one of me, there are hundreds or thousands of black students with at least equal talent who don’t get a chance,” he said, alluding to poverty or growing up in a drug environment.

What a Law Review Does

Law reviews, which are edited by students, play a double role at law schools, providing a chance for students to improve their legal research and writing, and at the same time offering judges and scholars a forum for new legal arguments. The Harvard Law Review is generally considered the most widely cited of the student law reviews.

On his goals in his new post, Mr. Obama said: ”I personally am interested in pushing a strong minority perspective. I’m fairly opinionated about this. But as president of the law review, I have a limited role as only first among equals.”

Therefore, Mr. Obama said, he would concentrate on making the review a ”forum for debate,” bringing in new writers and pushing for livelier, more accessible writing.

The president of the law review usually goes on to serve as a clerk for a judge on the Federal Court of Appeals for a year, and then as a clerk for an associate justice of the Supreme Court. Mr. Obama said he planned to spend two or three years in private law practice and then return to Chicago to re-enter community work, either in politics or in local organizing.

Professors and students at the law school reacted cautiously to Mr. Obama’s selection. ”For better or for worse, people will view it as historically significant,” said Prof. Randall Kennedy, who teaches contracts and race relations law. ”But I hope it won’t overwhelm this individual student’s achievement.”

Mr. Obama was elected after a meeting of the review’s 80 editors that convened Sunday and lasted until early this morning, a participant said.

Until the 1970’s the editors were picked on the basis of grades, and the president of the Law Review was the student with the highest academic rank. Among these were Elliot L. Richardson, the former Attorney General, and Irwin Griswold, a dean of the Harvard Law School and Solicitor General under Presidents Lyndon B. Johnson and Richard M. Nixon.

That system came under attack in the 1970’s and was replaced by a program in which about half the editors are chosen for their grades and the other half are chosen by fellow students after a special writing competition. The new system, disputed when it began, was meant to help insure that minority students became editors of The Law Review.

Harvard, like a number of other top law schools, no longer ranks its law students for any purpose including a guide to recruiters.

Black enrollment at Harvard Law School, after a dip in the mid-1980’s, has reached a record high this year, said Joyce Curll, the director of admissions. Of the 1,620 students in the three-year school, 12.5 percent this year are blacks, she said, and 14 percent of the first-year class are black. Nationwide enrollment by blacks in undergraduate colleges has dropped in recent years.

Mr. Obama succeeds Peter Yu, a first-generation Chinese-American, as president of The Law Review. After graduation, Mr. Yu plans to serve as a clerk for Chief Judge Patricia Wald on the of the United States Court of Appeals for the Federal Circuit.

Mr. Yu said Mr. Obama’s election ”was a choice on the merits, but others may read something into it.”

The first female editor of The Harvard Law Review was Susan Estrich, in 1977, who recently resigned as a professor at Harvard Law School to take a similar post at the University of Southern California. Ms. Estrich was campaign manager for Gov. Michael S. Dukakis of Massachusetts in his campaign for the Presidency in 1988.