Zimbabwe’s Mugabe May Be Stripped of Knighthood 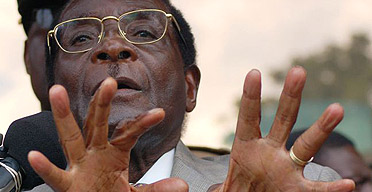 Revoking the title is a detailed, lengthy process that starts with the Foreign Office recommending the forfeit of the award, the spokeswoman said. That recommendation is made to the queen via the prime minister’s office. If the queen approves the recommendation, the Central Chancery of the Orders of the Knighthood is informed, according to officials (the chancery is part of the palace and organizes the knighthoods and honors). Finally, the Foreign Office notifies the recipient of the honor that it is being revoked.

Meanwhile, Mugabe used a U.N. food summit to launch an attack on his country’s old colonial master, accusing Britain of persuading other Western powers to impose policies against Zimbabwe that “cripple” his country’s economy and “thereby effect illegal regime change.” Mugabe’s presence at the Summit is causing outrage among some leaders, as he claims Britain and her allies is mounting polices and efforts to impose “illegal economic sanctions” against Zimbabwe while also cutting off “all developmental assistance”.

On the other hand, critics blame Mugabe’s policies for a dramatic drop in food production and agricultural exports in Africa’s “breadbasket”, Zimbabwe.

The African leader has frequently attacked Britain in the past. Ironically, knighthood is normally given to those trying to assist relations and situations with Britain, not merely act the country or its policies.