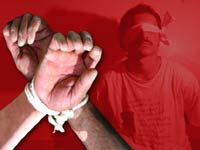 Five South Koreans, one woman and four men, were kidnapped while driving in Reynosa, a Mexican border city across the border from McAllen, Texas, police and embassy officials said Tuesday, and their captors reportedly are demanding a $30,000 ransom.

According to the South Korean Yonhap news agency, the captors falsely identified themselves as police, a common practice among criminals in Mexico. Mexican officials are investigating but had no leads in the case yet. In a statement made by a South Korean Embassy spokesman, the ransom had not been paid. He added that the kidnapped group had been looking into working in Mexico but did not elaborate. South Korea’s Foreign Ministry said in a statement that the five were alive, but Kim said officials were still trying to confirm that. Mexico has one of the highest rates of kidnappings for ransom in the world.

Many abductions are never reported to police, in part for fear officials themselves might be involved or that they would bungle a possible rescue.

Identity of Man Who Was Shot While Beating Boy

Police on Monday identified the man who was fatally shot by an officer for allegedly refusing to stop beating a toddler to death along a remote road as Sergio Casian Aguilar, 27.

On Saturday night, Aguilar parked his truck on an unlit road, removed a 2-year-old boy from his car seat and proceeded to stomp, kick and punch the boy to death, according to authorities and witnesses. The boy was unrecognizable when he was pronounced dead at Emanuel Medical Center.

Authorities have not released the boy’s name, but they say they believe he was Aguilar’s son. The relationship is being confirmed by DNA testing.

Several motorists called 911 and tried to stop the beating, authorities said. Witnesses report that Aguilar told people who tried to stop him that the boy was “trash.”

Responding to 911 calls, a Stanislaus County Sheriff’s Department helicopter landed in a field nearby. A Modesto police officer, Jerry Ramar, fatally shot Aguilar, who flashed his middle finger at the officer, after he failed to heed the officer’s warning to stop beating the child

Authorities have not released the name of the boy’s mother.

Aguilar had no previous criminal history, police said. Results of toxicology tests on Aguilar are expected in four weeks.

The original, breaking news story can be read here

Man Killed By Police While Beating Toddler To Death

In Stanislaus County, California, police killed a 27-year-old man found kicking, punching and stomping a toddler to death after attempts by both police and other people to stop him. Following the incident, investigators were trying to establish the relationship between the suspect and the child he had beaten to death. The Stanislaus County coroner said the boy, based on his size, appeared to be between 1 and 2 years old and he will have to be identified through a blood or DNA test. Police were perplexed and quite shocked about any possible motive this man could have had.

Police found a child’s car seat in the back of the suspect’s four-door pickup truck. The truck caught the attention of an elderly couple at 10:13 p.m. Saturday because it was stopped in the two-lane road facing the wrong direction. As they got closer, the couple saw the man beating the toddler behind his truck and throwing the child on the ground. The suspect was engaged in what he was doing. He just pushed off anyone who attempted to intervene and went back to it. People in the area began calling 911.

Responding to those emergency calls, a police helicopter landed in a cow pasture at 10:19 p.m. carrying a Modesto police officer who shot the man to death after he refused an order to stop beating the child. No children within the dead boy’s age range have been reported kidnapped or missing in Stanislaus County, according to authorities.

Woman Locked Up 18 Years For Being Pregnant Out of Wedlock 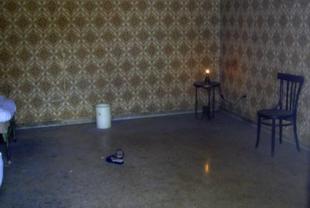 Police in southern Italy report that a family kept a woman locked in a room in their house for 18 years because they were angry she was pregnant out of wedlock.

The woman, now 47, was freed by police after receiving an anonymous tip on Friday in Santa Maria Capua Vetere and was taken to the hospital for psychiatric evaluation and care. The brother and sister of the woman were both arrested, while the 80-year old mother on house arrest.

Italian TV showed the room with a bed, chair, filthy toilet and sink.

Police said the woman’s child was living with relatives and didn’t know about his mother and is now 17-years old.

Another Child-Molesting Cult in New Mexico

State officials in Clayton, New Mexico have been aware of and investigating an apocalyptic cult, Lord Our Righteousness Church, that supposedly has child-molesting as part of its practices, whether stated or not in its mission statement. Although this is NOT an FLDS branch, it is not unlike the cult in Texas that recently was raided and had hundreds of children taken. A man who goes by Michael Travesser ((his real name is Wayne Bent (the bearded man in the above photo)) says he was anointed the Messiah by God in 2000 had told cult members that he must sleep with seven virgins. Recently, a father, John Sayer, who has two female children in the cult, left the cult after 16 years in hopes of saving hs family. Unfortunately, after their departure, the two girls (ages 14 and 15) returned to the cult. Children, Youth and Families Department got involved after a tip and removed the Sayer’s youngest last week. Two girls and one boy, all under the age of 18, were taken in the state-intervention.

Sayer says that his daughters were asked to just “lay naked” with Micheal, but that anything could have happened. He had continually denied the requests of Michael to make his daughters 2 of the 7 virgins he would sleep with. In a posting on the website for the cult, Michael said that he never had sex with minors nor did the cult involve any kind of molestation, child or adult.

Sounds all too familar these days. Stay tuned.

Becoming increasingly worried about their son who, as previously reported by iNPLACENEWS, had been kidnapped, the parents of the suspected victim in Florida are increasing the reward for their son’s return from $10,000 to $250,000.