Are US and North Korean Relations Improving? 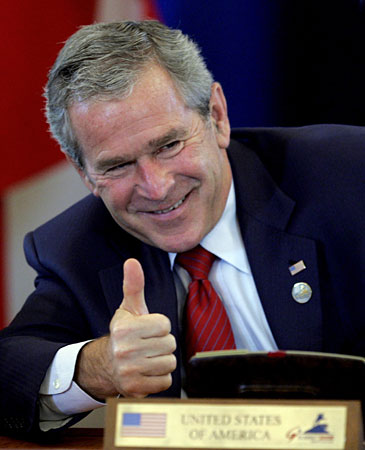 The United States has proposed a mechanism for verifying North Korea’s claims about its nuclear past, Washington’s top envoy to the nuclear talks said Monday.

The proposal was made in Beijing last week, and the U.S. is waiting for a response from Pyongyang, U.S. Assistant Secretary of State Christopher Hill told reporters.

After giving North Korea the proposal “we … asked them to come back with specific comments,” said Hill, who will assist U.S. Secretary of State Condoleezza Rice in talks between the foreign ministers of the six nations involved in the nuclear negotiations – China, Japan, the two Koreas, Russia and the U.S.

On Tuesday, South Korea’s main nuclear envoy confirmed the proposal was made to the North.

“The ball is actually in the North Korean court because they already received the draft of verification protocol,” Kim Sook told reporters after talks with Hill. Details of the proposal were not known.

Hill said the six-party talks, to be held Wednesday on the sidelines of a regional security conference in Singapore, are likely to discuss the verification issue.

In return, Washington announced it would remove the North from its terrorism blacklist and relaxed some economic sanctions on the communist nation. That led Pyongyang to blow up the cooling tower at its main nuclear reactor, to demonstrate its commitment to abandoning nuclear weapons.

Six-nation nuclear negotiations were then held in Beijing less than two weeks ago – for the first time in nine months – and produced an agreement on principles for proceeding with verification of North Korea’s claims. One of the principles says the procedure should involve interviews with North Korean nuclear experts.

Hill has said earlier that the U.S. wants to reach agreement with the North on a specific verification protocol by early September. Last week’s proposal offered to the North is believed to be the first draft of the envisioned protocol.

“We’ve always maintained that verification is essential,” Hill said Monday. “We hope to make some progress on that very soon.”

Wednesday’s session would mark the highest-level meeting in the six-country negotiations, which began in 2003 with the aim of convincing North Korea to dismantle its nuclear program.

It would also be the first time Rice has met North Korea’s top diplomat.

China, host of the nuclear talks, praised the planned meeting as a good chance to progress on denuclearization.

“This is the first time that the high-level delegations to the six-party talks have held an informal meeting,” said Chinese Foreign Minister Yang Jiechi after talks with his Japanese counterpart. “I think it will be very good for advancing the agenda of the talks.”

“I would not exaggerate its importance,” he said. “I think it’s an opportunity for people to get together and exchange some thoughts informally.”

Elian Gonzalez, the Cuban boy at the center of an international custody battle eight years ago has joined Cuba’s Young Communist Union and never let down ex-President Fidel Castro and his brother Raul Castro, according to the Communist youth newspaper Juventud Rebelde.

Now 14, Elian was 6 when his relatives in Miami lost their fight to keep him in the United States, and he was returned to Cuba in mid-2000 with his father, after surviving a boating accident off the Florida coast that killed his mother while attempting to get to the U.S.

The newspaper reported Sunday that the boy was among 18,000 people who joined the group.