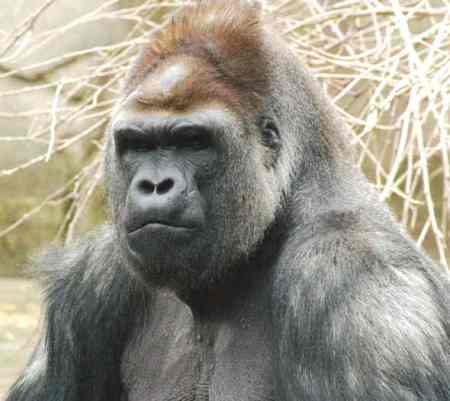 Wildlife researchers said Tuesday that they’ve discovered 125,000 western lowland gorillas deep in the forests of the Republic of Congo, calling it a major increase in the animal’s estimated population.

The Wildlife Conservation Society, based at New York’s Bronx Zoo, and the Republic of Congo said their census counted the newly discovered gorillas in two areas of the northern part of the country covering 18,000 square miles.

Previous estimates, dating to the 1980s, put the number of western lowland gorillas at less than 100,000. But the animal’s numbers were believed to have fallen by at least 50 percent since then due to hunting and disease, researchers said. The newly discovered gorilla population now puts their estimated numbers at between 175,000 to 225,000.

“This is a very significant discovery because of the terrible decline in population of these magnificent creatures to Ebola and bush meat,” said Emma Stokes, one of the research team.

The researchers in the central African nation of Republic of Congo – neighbor of the much larger Congo – worked out the population figures by counting the sleeping “nests” gorillas make. The creatures are too reclusive and shy to count individually.

Craig Stanford, professor of anthropology and biology at the University of Southern California, said he is aware of the new study. “If these new census results are confirmed, they are incredibly important and exciting, the kind of good news we rarely find in the conservation of highly endangered animals.” He added that independent confirmation will be valuable because nest counts vary depending on the specific census method used.

While calling the new census important, Stokes said it does not mean gorilla numbers in the wild are now safe.

“Far from being safe, the gorillas are still under threat from Ebola and hunting for bush meat. We must not become complacent about this. Ebola can wipe out thousands in a short period of time,” she said.

The report was released as primatologists in Edinburgh, Scotland warned that nearly half of the world’s 634 types of primates are in danger of becoming extinct due to human activity. That figure, carried in a comprehensive review of the planet’s apes, monkeys, and lemurs, included primate species and subspecies.

Scientists meeting at the International Primatological Society Congress in Edinburgh said they hoped the report will help spur global action to defend mankind’s nearest relatives from deforestation and hunting.

Primatologists warned that species from the giant mountain gorillas of central Africa to the tiny mouse lemurs of Madagascar are on the “Red List” for threatened species maintained by the IUCN.

The review was funded by Conservation International, the Margot Marsh Biodiversity Foundation, Disney’s Animal Kingdom and the IUCN. It is part of an examination of the state of the world’s mammals due to be released at the 4th IUCN World Conservation Congress in Barcelona, Spain, in October.

“It is not too late for our close cousins the primates, and what we have now is a challenge to turn this around,” said Russell A. Mittermeier, president of Conservation International and the chairman of the IUCN Species Survival Commission’s primate specialist group.

“The review paints a bleak picture. Some primates are quite literally being eaten to extinction. But it is by no means a doomsday scenario. There is a lot of will here among these scientists in Edinburgh and in the countries where primates live.”

This entry was posted on Tuesday, August 5th, 2008 at 4:45 pm and is filed under Africa, discovery, news. You can follow any responses to this entry through the RSS 2.0 feed. You can leave a response, or trackback from your own site.