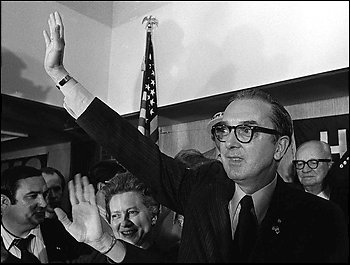 Former Sen. Jesse Helms, who built a career along the fault lines of racial politics and battled liberals, Communists and the occasional fellow Republican during 30 conservative years in Congress, died on the Fourth of July. He was 86.

Helms died at 1:15 a.m., said the Jesse Helms Center at Wingate University in North Carolina. The center’s president, John Dodd, said in a statement that funeral arrangements were pending.

“He was very comfortable,” said former chief of staff Jimmy Broughton, who added Helms died of natural causes in Raleigh.

Helms, who first became known to North Carolina voters as a newspaper and television commentator, won election to the Senate in 1972 and decided not to run for a sixth term in 2002.

“Compromise, hell! … If freedom is right and tyranny is wrong, why should those who believe in freedom treat it as if it were a roll of bologna to be bartered a slice at a time?” Helms wrote in a 1959 editorial that foretold his political style.

As he aged, Helms was slowed by a variety of illnesses, including a bone disorder, prostate cancer and heart problems, and he made his way through the Capitol on a motorized scooter as his career neared an end. In April 2006, his family announced that he had been moved into a convalescent center after being diagnosed with vascular dementia, in which repeated minor strokes damage the brain.

Helms’ public appearances had dwindled as his health deteriorated. When his memoirs were published in August 2005, he appeared at a Raleigh book store to sign copies but did not make a speech.

In an e-mail interview with The Associated Press at that time, Helms said he hoped what future generations learn about him “will be based on the truth and not the deliberate inaccuracies those who disagreed with me took such delight in repeating.”

“My legacy will be up to others to describe,” he added.

Helms served as chairman of the Agriculture Committee and Foreign Relations Committees over the years at times when the GOP held the Senate majority, using his posts to protect his state’s tobacco growers and other farmers and place his stamp on foreign policy.

His opposition to Communism defined his foreign policy views. He took a dim view of many arms control treaties, opposed Fidel Castro at every turn, and supported the contras in Nicaragua as well as the right-wing government of El Salvador. He opposed the Panama Canal treaties that President Jimmy Carter pushed through a reluctant Senate in 1977.

Early on, his habit of blocking nominations and legislation won him a nickname of “Senator No.” He delighted in forcing roll call votes that required Democrats to take politically difficult votes on federal funding for art he deemed pornographic, school busing, flag-burning and other cultural issueIn 1993, when then-President Clinton sought confirmation for an openly homosexual assistant secretary at the Department of Housing and Urban Development, Helms registered his disgust. “I’m not going to put a lesbian in a position like that,” he said in a newspaper interview at the time. “If you want to call me a bigot, fine.”

After Democrats killed the appointment of U.S. District Judge Terrence Boyle, a former Helms aide, to a federal appeals court post in 1991, Helms blocked all of Clinton’s judicial nominations from North Carolina for eight years.

Helms occasionally opted for compromise in later years in the Senate, working with Democrats on legislation to restructure the foreign policy bureaucracy and pay back debts to the United Nations, an organization be disdained for most of his career.

And he softened his views on AIDS after years of clashes with gay activists, advocating greater federal funding to fight the disease in Africa and elsewhere overseas.

But in his memoirs, Helms made clear that his opinions on other issues had hardly moderated since he left office. He compared abortion to both the Holocaust and the terrorist attacks of Sept. 11, 2001.

“I will never be silent about the death of those who cannot speak for themselves,” the former senator wrote in “Here’s Where I Stand.”

Helms never lost a race for the Senate, but he never won one by much, either, a reflection of his divisive political profile in his native state.

He knew it, too. “Well, there is no joy in Mudville tonight. The mighty ultraliberal establishment, and the liberal politicians and editors and commentators and columnists have struck out again,” he said in 1990, after winning his fourth term.

He won the 1972 election after switching parties, and defeated then-Gov. Jim Hunt in an epic battle in 1984 in what was then the costliest Senate race on record.

He defeated former Charlotte Mayor Harvey Gantt in 1990 and 1996 in racially tinged campaigns. In the first race, a Helms commercial showed a white fist crumbling up a job application, these words underneath: “You needed that job … but they had to give it to a minority.”

“The tension that he creates, the fear he creates in people, is how he’s won campaigns,” Gantt said several years later.

Helms also played a role in national GOP politics – supporting Ronald Reagan in 1976 in a presidential primary challenge to then-President Gerald R. Ford. Reagan’s candidacy was near collapse when it came time for the North Carolina primary. Helms was in charge of the effort, and Reagan won a startling upset that resurrected his challenge.

During the 1990s, Helms clashed frequently with President Clinton, whom he deemed unqualified to be commander in chief. Even some Republicans cringed when Helms said Clinton was so unpopular he would need a bodyguard on North Carolina military bases. Helms said he hadn’t meant it as a threat.

Asked to gauge Clinton’s performance overall, Helms said in 1995: “He’s a nice guy. He’s very pleasant. But … (as) Ronald Reagan used to say about another politician, `Deep down, he’s shallow.'”

Helms went out of his way to establish good relations with Madeleine Albright, Clinton’s second secretary of state. But that didn’t stop him from single-handedly blocking Clinton’s appointment of William Weld – a Republican – as ambassador to Mexico.

Helms clashed with other Republicans over the years, including fellow Sen. Richard Lugar of Indiana in 1987, after Democrats had won a Senate majority. Helms had promised in his 1984 campaign not to take the chairmanship of the Foreign Relations Committee, but he invoked seniority over Lugar to claim the seat as the panel’s ranking Republican.

He was unafraid of inconveniencing his fellow senators – sometimes all of them at once. “I did not come to Washington to win a popularity contest,” he once said while holding the Senate in session with a filibuster that delayed the beginning of a Christmas break. And he once objected to a request by phoning in his dissent from home, where he was watching Senate proceedings on television.

In many ways, Helms’ values were forged in the small town where his father was police chief.

“I shall always remember the shady streets, the quiet Sundays, the cotton wagons, the Fourth of July parades, the New Year’s Eve firecrackers. I shall never forget the stream of school kids marching uptown to place flowers on the Courthouse Square monument on Confederate Memorial Day,” Helms wrote in a newspaper column in 1956.

He took an active role in North Carolina politics early on, working to elect a segregationist candidate, Willis Smith, to the Senate in 1950. He worked as Smith’s top staff aide for a time, then returned to Raleigh as executive director of the state bankers association.

Helms became a member of the Raleigh city council in 1957 and got his first public platform for espousing his conservative views when he became a television editorialist for WRAL in Raleigh in 1960. He also wrote a column that at one time was carried in 200 newspapers. Helms also was city editor at The Raleigh Times.

Helms and his wife, Dorothy, had two daughters and a son. They adopted the boy in 1962 after the child, 9 years old and suffering from cerebral palsy, said in a newspaper article that he wanted parents.

This entry was posted on Friday, July 4th, 2008 at 4:39 pm and is filed under Celeb News, death, news, Politics, republicans, senate. You can follow any responses to this entry through the RSS 2.0 feed. You can leave a response, or trackback from your own site.