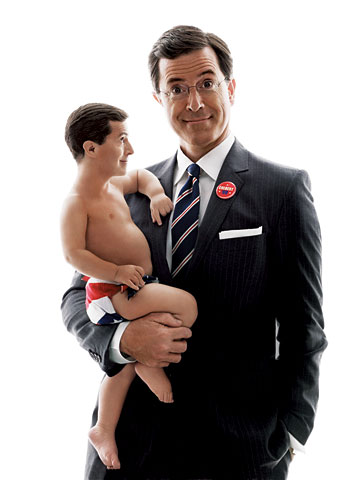 Having already earned the title of “Greatest Living American”, it is only fitting that Stephen Colbert would also be named “Webby Person of the Year.”
Colbert became the “Greatest Living American” according to Google. His fans had “Google-bombed” him to the top. In other words, by posting comments all over the Web that contained his name and “Greatest Living American”, they made him the top result when anyone searched Google for the title. Also, Colbert’s use of the Internet, including questioning the accuracy of Wikipedia, getting 78 new members per minute added to his presidential candidacy Facebook page, and his ability to get fans to rack up donations online for DonorsChoose.org earned him the award.

The Webby Awards honor excellence on the Internet, including Web sites, online film and video, mobile Web sites and interactive advertising from around the world.

This entry was posted on Tuesday, May 6th, 2008 at 2:59 pm and is filed under arts/culture, Celeb News, democracy, elections, government, internet, news, presidential campaign, presidential race, television, world wide web. You can follow any responses to this entry through the RSS 2.0 feed. You can leave a response, or trackback from your own site.