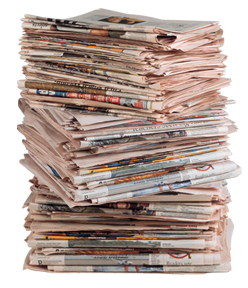 The newspaper carrier had noticed the newspapers piling up outside the house of Blanche and Fred Roberts. Bruce Pitts thought this was odd and worried that something might be wrong with the elderly couple on his paper route.

“It was never like them to leave a newspaper in their tube,” Pitt said Tuesday. “That wonderful, small voice inside me said, `This isn’t right.'”

Having tried knocking and ringing the door numerous times without a response of any kind, Pitts decided to work his way into an unlocked side-door. Upon entry, he noticed the 84-year old Blanche looking back at him while on the floor underneath her husband. Blanche’s 77-yearold husband had apparently passed away of a heart attack after mowing the lawn. Even though she was pinned underneath her husband’s body, she was at peace, and she only requested some water. The saddest part is that she described her husband’s condition as “sleeping”, as if she had not realized or fully grasped that he was gone.

Pitts said, “Blanche would say, `I’ve been praying for you at night whenever the weather’s bad, realizing you’re out in it delivering our papers”. “We’d always say a little prayer back.”

This entry was posted on Wednesday, April 30th, 2008 at 4:48 pm and is filed under Bizarre, hero, news. You can follow any responses to this entry through the RSS 2.0 feed. You can leave a response, or trackback from your own site.